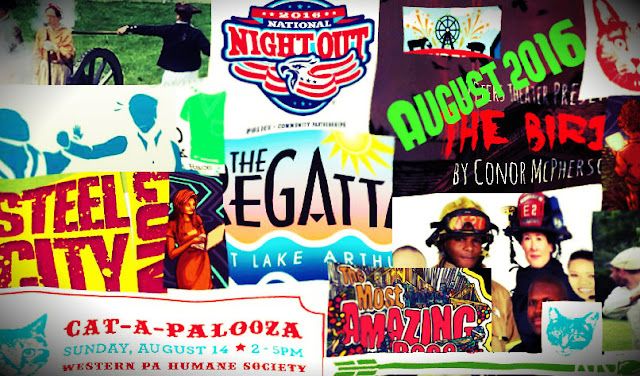 Check out these featured 2016 August Events.

The Birds
12 Peers Theater / Studio Theatre at the University of Pittsburgh Cathedral of Learning
8/4/2016 to 8/21/2016
Daphne du Maurier’s short story, also the basis for Alfred Hitchcock’s classic film, is boldly adapted by Conor McPherson—a gripping, unsettling, and moving look at human relationships in the face of societal collapse..
Learn more

The Kids Triathlon for Habitat for Humanity of Greater Pittsburgh
North Park
8/6/2016
The Kids Triathlon started out as a fundraiser for Habitat for Humanity of Greater Pittsburgh but has become so much more than that over the past sixteen years. While it remains Habitat’s major fundraising effort to raise money to build houses for people in need of affordable, decent housing, it also gives kids a fun and energy-burning activity in the summertime! Athletes of all abilities are encouraged to participate.
Learn more

Yinzer 5K
North Park Boat House
8/6/2016
Registration starts at 8 AM and our Pittsburgh themed race will start at 9 AM! Yinz' should join us!
Learn more

Horror Realm Con's Horror Fan Craft Fair and Flea Market
Castle Shannon VFD Memorial Hall
8/6/2016
The 5th annual Horror Fan Flea Market. A way for horror fans to clean out their stash of movies, books, posters, figures, etc. and make sure they find a loving home with other horror fans! And now we are adding arts, crafts and other handmade items.
Learn more

2016 Regatta at Lake Arthur
8/6/2016 to 8/7/2016
This annual event brings thousands of visitors each year to experience and enjoy the 3,225 acres of Lake Arthur with over 40 miles of scenic shoreline. The Regatta offers land and lake activities along with exciting new opportunities to enjoy the natural resources of the park.
Learn more

Y108 CBS Radio Pittsburgh - eat.drink.SUMMER
The Lodge at North Park
8/12/2016
Food and beverages from around the ‘burgh, live music and a night out with friends!  Tickets are $30!
Learn more

Farm to Fork Dinner
Soergel Orchards
8/13/2016
Join Soergels for a celebration of slow food and reconnect with the land during our annual sunset dinner in the apple orchard. Spend an evening with our family on the land where your food is grown as we share a behind-the-scenes look at one of our farms.
Learn more

The Lawrence County Fair
8/15/2016 to 8/20/2016
This year we are bringing back some favorite events like the Rodeo and Demolition Derby as well as All Your Classic Favorites like Rides & Games, Great Food and Exhibits.  We are providing great opportunities for Livestock Breeders, Agricultural Exhibitors, Homemakers and 4-H and FFA members to display to the public their products, crafts, clothing, baked goods and animals.
Learn more

The Salvation Army - The Most Amazing Race
Station Square
8/27/2016
Come join us for Pittsburgh's city-wide challenge race! Teams of two will travel around the city completing challenges and collecting clues.
Learn more

Abstractions
Pittsburgh, PA
8/18/2016 to 8/20/2016
Abstractions is a new conference that brings together everyone involved in modern software development — designers, developers, DevOps, and community leaders — to teach, learn, and connect.
Learn more

Artillery and Artificers
Fort Pitt Museum
8/6/2016
See what artillerists at Fort Pitt needed to do before they could fire a cannon. Artisans such as tinners, turners, and blacksmiths will demonstrate and discuss how their trades contributed to cannon firings.
Learn more

Vintage 1860s Base Ball Game
Meadowcroft Museum - Avella, PA
8/13/2016
Cheer for a game of baseball, 19th century style. Come watch a “base ball” (originally written as two words) game between the Somerset Frosty Sons of Thunder and the Addison Mountain Stars, who will wear vintage uniforms and follow the rules commonly used during the 1860s. Enjoy food and fun in the 19th century American tradition.
Learn more

Posted by Pittsburgh.net at 9:20 AM No comments: 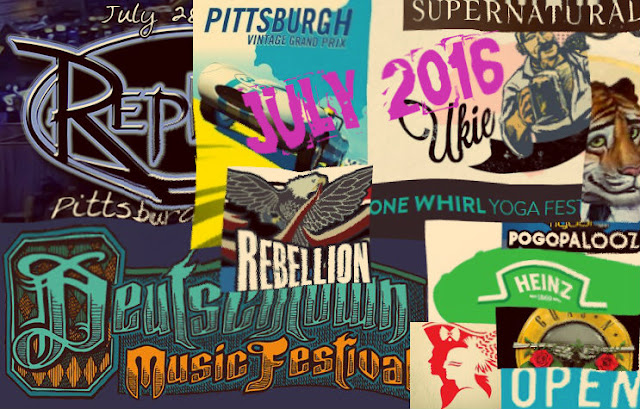 Check out these featured 2016 July Events.

Extreme PogoWorld Championships
Swissvale, PA
07/8/2016 to 07/9/2016
At the beautiful, apocalyptic setting of Carrie Furnaces in Swissvale, PA. You will too. The event is centered around the best Pogo Park ever constructed, and the top handful of Riders from around the world will battle it out in three competitions.
Learn more

Picklesburgh
Rachel Carson Bridge in Downtown Pittsburgh
07/15/2016 to 07/16/2016
Downtown Pittsburgh transforms into Picklesburgh, highlighted by a giant flying Heinz pickle balloon, custom built by a team that also crafts balloons for Disney and the Macy’s Thanksgiving Day parade. The Picklesburgh festival is a culinary celebration that goes beyond the dill pickle to include international dishes, prepared foods and artisan cocktails that feature pickled ingredients; an embrace of the farm-to-table movement and the rising popularity of canning; a selection of handcrafted foods and artisan cocktails from local restaurants; informative how-to demos and author talks at our demo area; merchandise such as pickled goods, books and DIY products.
Learn more

2016 Annual St. Sebastian Parish Festival
Siebert Road, Pittsburgh, PA
07/11/2016 to 07/16/2016
The Saint Sebastian Parish Festival and Flea Market is one of the largest and most widely attended church festivals in the Diocese of Pittsburgh. Each year, it attracts approximately 1,500 people per night and raises more funds for Saint Sebastian School and Parish than any other fundraising activity. The Festival is fun for all ages, with rides for both children and adults, games, outdoor festival foods and seated dinners, bingo, a basket auction and much, much more!
Learn more

Deutschtown Music Festival
Northside / Pittsburgh, PA
07/8/2016 to 07/9/2016
Deutschtown Music Festival is a free community music and arts festival. Over 125 bands will perform to upwards of 10,000 people in over 15 venues and 4 outdoor stages - all within walking distance of the East Ohio Street business district. The event features family-friendly activities and a stage in a city park and a two-block closed city street that will feature numerous food trucks and vendors.
Learn more

Slovenefest 2016
Enon Valley, PA
07/8/2016 to 07/10/2016
Slovenefest, a three-day event held the second weekend of July at the SNPJ Recreation Center in the Borough of SNPJ, PA, brings together thousands to enjoy the ethnic food, music, culture and fun of Slovenia.
Learn more

Artillery and Artificers
Fort Pitt Museum
07/23/2016
See what artillerists at Fort Pitt needed to do before they could fire a cannon. Artisans such as tinners, turners, and blacksmiths will demonstrate and discuss how their trades contributed to cannon firings.
Learn more

OpenStreetsPGH
Pittsburgh, PA
07/31/2016
What if you could close down a city street, and use it for a few hours of good, healthy, family fun?
Learn more

Posted by Pittsburgh.net at 6:00 AM No comments: