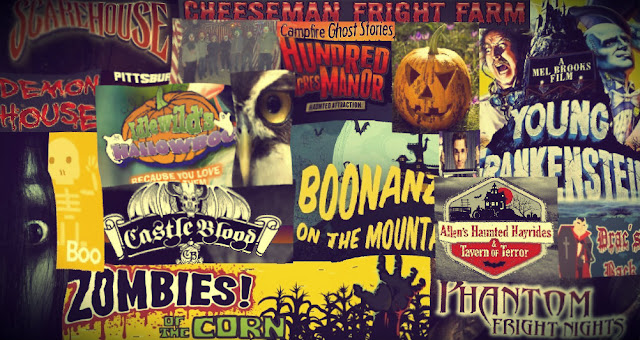 All Hail the Pumpkin King - Halloween is back in Pittsburgh! Check out our ever-growing list of  2016 Pittsburgh Halloween events and attractions that are happening in the month of October.  Check back often for newly added events.  Happy Halloween!

Halloween Party for Pets!
Animal Friends
10/31
Is your dog tired of running to the door and barking at all the little ghosts and goblins every Halloween? Give him – and yourself – a break this year and come to Animal Friends for a howling good time! A trick or treat trail, canine games and other activities will be offered in our outreach center. Please, no humans in costume. All dogs in attendance should be both people- and dog-friendly and up-to-date on vaccinations.
Learn more

Halloween Reading
Creative Nonfiction Foundation
10/29
Calling all witches, ghouls, and ghost writers. Join us for some spooky-good nonfiction. Local authors Brian Broome and Jeff Oaks will give a reading in CNF's courtyard (weather permitting). Festive bites and brews will be provided.
Learn more

Diary of a Madman and Poe's Last Night
New Hazlett Theater
10/5 - 10/16
Start off the October thrill season with a night of smart and scary chills. Meet Edgar Allan Poe (David Crawford) in “Poe’s Last Night,” a mysterious imagining of Poe’s final hours on the streets of Baltimore, featuring Poe's dark and inventive stories and poems. Then meet Poprishchin (Jon Hayden) in “Diary of a Madman,” the classic short story of a man's descent into madness by Nikolai Gogol. Runs 125 minutes with a 15 min Intermission.
Learn more

Pittsburgh 48 Hour Horror Film Screenings
The Hollywood Theater
10/20 - 10/21
Do you love things that go bump in the night? The Pittsburgh 48 Hour Film Horror Project is a creative contest where teams of filmmakers create a horror film in a single weekend.
Join us to watch the films and vote on your favs!
Learn more

Night of the Singing Dead
Jergel's Rhythm Grille
10/21 - 10/22
The list is large this year; Prince, David Bowie, Glenn Frey, Merle Haggard, among many others! This year's show will feature many who have left us throughout the year, all will be celebrated throughout the event! This is the show's 24th year, don't miss what may be the best ever!
Learn more

Nosferatu w/ The Andrew Alden Ensemble
Hollywood Theater - Dormont
10/16/2016
The film, shot in 1921 and released in 1922, was an unauthorized adaptation of Bram Stoker's Dracula.
Learn more

Phantom Fright Nights
Kennywood Park
The worst nightmares keep coming back. Like the undead crawling out of their graves, Phantom Fright Nights is back at Kennywood. Come experience the most intense spectacles of sheer terror – BioFear, Voodoo Bayou, Mortem Manor, Villa of the Vampires, and others too horrific to mention.
Learn more

Halloween Storytime
Barnes and Noble
Settlers Ridge, Cranberry Square, Waterworks Mall, Waterfront/Homestead, South Hills Village
10/22
Beep! Beep! It's Halloween! Little Blue Truck is back and picking up his animal friends for a costume party. And in I Need My Monster, a unique under-the-bed story. A fun-filled Halloween Storytime!
Learn more

A Haunting In Pennsylvania: Divine Power - by Aurianna Colbert
Barnes and Noble Cranberry Square
10/15
There have been stories of witches, ghosts and things that go bump in the night. There have been cases of poltergeists, hauntings and ghosts. But no story is as hair-raising or spine-chilling as a story that is horrifyingly true. A difficult and evil tragedy that can happen to anyone, even to you. Stop by and welcome author Aurianna Colbert as she will be signing copies of her book from 2 to 4pm!
Learn more

The Paragon Ragtime Orchestra's Haunted Hollywood
The Palace Theatre
10/28/2016
Go back to the era of silent film as we celebrate the 90th Anniversary of The Palace Theatre.  Three complete ghostly films will be featured – Buster Keaton’s The Haunted House, Charlie Chaplin’s The Adventurer, and Harold Lloyd’s Haunted Spooks, all accompanied live with their original orchestral scores and sound effects by The Paragon Ragtime Orchestra.
Learn more

Drac's Back
The Palace Theatre
10/15/2016
When the Science Fair school van breaks down on the trip home, students take refuge in a spooky old house. What could go wrong? Halloween fun for the whole family.
Learn more

ZooBoo
Pittsburgh Zoo and Aquarium
10/22 & 10/23 - 10/29 & 10/30
Venture through the Zoo collecting treats, enjoying the animals, and participating in other fun activities along the way. Get spooked at the no-so-haunted house. Conjure up a frightfully fun costume for the halloween parade and costume contest.
Learn more

Zombies of the Corn
Three Rivers Paintball Park
Zombie shoot & zombie compound terror! Board our "Zombie Fighting Vehicle"- take aim and shoot live zombies as they try to attack you and your friends (they don't shoot back). Then find your way through the zombie compound before being discovered by roaming zombies and other creatures!
Learn more

BOOnanza on the Mountain
Nemacolin Woodlands Resort
10/21 - 10/29
Join us for a night of frights during Nemacolin's BOOnanza on the Mountain! The Sundial Lodge and Adventure Center will be host to ghouls and goblins during Friday and Saturday, October 21-22 & 28-29. Experience wolf encounters, eliminate zombies by paintball and go for a Nightmare Jeep® Ride through Nemacolin's Haunted Woods - if you dare. Apex bar will offer an escape from the nighttime scares for libations and Halloween treats.
Learn more

Freddy's Haunts
Beaver County
The residence on McCune Road has been left abandoned and over grown for years. What happened here years ago shocked and disgusted the quiet township of Independence.
Learn more

Halloween Happenings
Phipps Conservatory
10/28/2016
Bring costumed kids for a boo-tanical bash as we offer a host of fun family activities and healthy snacks, all free with Phipps admission.
Learn more

Haunted History Hayride
Bushy Run Battlefield
10/22/2016
Experience the battlefield in a whole new perspective at night!  Guided hay wagons take visitors back in time as they stop along the trail where re-enactors portray 18th century characters.  But beware, ghost and goblins are lurking in the woods and are too scary for those children under the age of 4.
Learn more

Hobgoblin Hikes
Westmoreland County
Twin Lakes Park Hike & Cedar Creek Park Hike
Recommended for ages eight and over, the Hobgoblin Hikes are half-mile outdoor guided walks through the haunted woods of our County Parks. Visitors can expect to be led through mazes and cemeteries, and past more than 100 ghouls, goblins and monsters. The Hobgoblin Hikes are offered to provide a safe, family alternative to conventional trick-or-treating. Parents are encouraged to attend the events with their children.
Learn more

Lonesome Valley Farms Haunted Hayride & Walk-Thru
Greensburgh, PA
In the Fall, the farm boasts one of the area's number one Haunted Attractions... The Haunted Hayride with Maze Trail AND The Slotter Farm House & Barn. There is also a huge 5+ acre NON-HAUNTED Get Lost Corn Maze.
Learn more

Township of Pine Halloween in the Park
Pine Community Center
10/22
Enjoy ghost stories, a hayride, bonfire, crafts, and a costume parade and contest.  A GOULISH GOOD TIME FOR THE WHOLE FAMILY!
Learn more

Mt. Lebanon Halloween Pumpkin Patch Parade
10/29
Wear your Halloween costume and watch the parade pass by on the sidewalks between Mt. Lebanon Cemetery and Washington Elementary School on Washington Road. After the MTL Firetrucks pass and the scarecrow/pumpkin inflatable passes, children with adult chaperones can join the parade. Following the parade, children are welcome to trick or treat at participating businesses along Washington Road. Look for the orange "Trick or Treat" sign in their store / business window.
Learn more

Boosegumps Twilight Circus
Pittsburgh Indoor Sports Arena
10/29 - 10/30
As you walk through the fog, you hear a carousel in the distance. Something tells you to turn back, but your curiosity gets the best of you.
Learn more

Posted by Pittsburgh.net at 9:30 AM