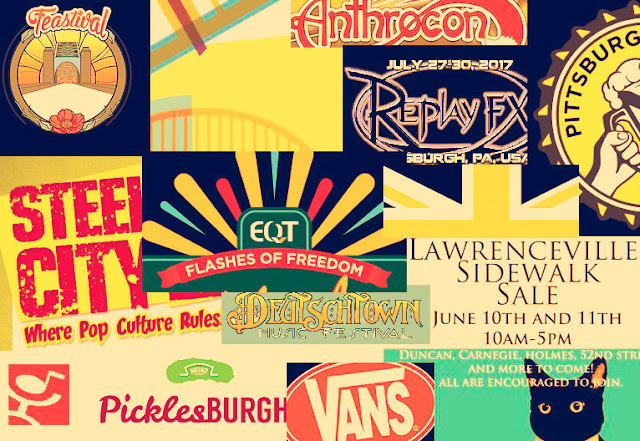 Summer is here which means Pittsburgh festival season is about to take off. The unofficial kick-off of the 2017 Pittsburgh festival season begins with the Three Rivers Arts Festival on June 2nd and rolls all summer long to include many unique events like Picklesburgh, The Deutschtown Music festival, Anthracon and more.  Check out these featured Pittsburgh summer festivals and start filling out your must-do event calendars today.

Steel City Comic Con Special Horror Fan Edition
June 9-11, 2017
You don't want to miss being part of what will be one of the largest horror conventions in the United States!
Learn More

Lawrenceville Sidewalk Sale
June 10-11, 2017
Sidewalk sale in Lawrenceville: Duncan, Carnegie Holmes, 52nd St, Stanton and others. All residents are encouraged to participate. No streets will be blocked off, just residents putting out things for sale on the sidewalk in front of their residence.
Learn More

Mattress Factory's 2017 Urban Garden Party
June 16, 2017
Don't miss the hottest party in Pittsburgh - The Mattress Factory's 20th annual signature fundraiser! Indulge in food and drink from 40 of the city's best restaurants and bars, dance the night away to live music, and much more.
Learn More

Anthrocon 21st Annual Convention
June 29-July 2, 2017
ANTHROCON is the world's largest convention for those fascinated with anthropomorphics, which are humanlike animal characters such as have fascinated mankind since the dawn of human imagination. We are a collection of artists, animators, writers, costumers, puppeteers, and just everyday fans who enjoy cartoon animals and their kin. Membership is open to any and all who like to imagine what it would be like if animals could walk and talk as we do -- and no, you do not have to wear a costume to attend!
Learn More

Night in the Tropics World Tour
National Aviary
July 8, 2017
Travel around the equator at our 15th Annual Night in the Tropics! Indulge in the sights, sounds, and flavors of the tropics.  Celebrate the diversity of our remarkable birds and enjoy global entertainment!
Learn More

BRITSBURGH 2017 - A Festival of Britain in Pittsburgh
September 5-10, 2017
The annual six-day Britsburgh Festival celebrates the long- standing connections between the Pittsburgh region and the United Kingdom. The Festival gives tens of thousands of people in the region an opportunity to enjoy a sense of Britain through music, films, discussions, teas, community-events, art, readings, beer, Shakespeare, tours, Dr. Who, and much more.
Learn More

The Pittsburgh Pierogi Festival
September 24, 2017
The annual celebration of the #CityofDumplings will feature our city’s favorite food from over two dozen restaurants, chefs, and pierogi purveyors who will be serving up hot and delicious pierogies, creative pierogi-inspired dishes, dessert pierogies and more!
Learn More


The 2017 Dollar Bank Three Rivers Arts Festival sponsored by the Pittsburgh Cultural Trust is happening June 2-11, 2017. Check out all of the music, events and activities for this years festival at traf.trustarts.org. Spend the day perusing all of the cool art and exhibits, listening to a myriad of music styles  and stuffing your face with some of the greatest festival fare anywhere!

Visit the Three Rivers Arts Festival for the entire festival guide.
Posted by Pittsburgh.net at 9:24 AM No comments: